Meet your Board | Ron Benson 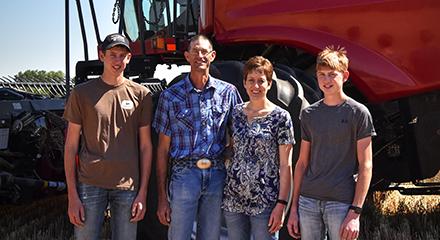 The Central Valley Ag Board of Directors is made up of local, agricultural leaders, who are recognized for their industry expertise, as well as economic and community development skills. The board currently has 21 directors and two associate directors. These individuals are located in your communities throughout the CVA territory.    Ron Benson is a CVA Director for Region 7. His farm is located near Clay Center, Kansas, just a few miles northeast of town. Ron primarily raises corn, soybeans, grain sorghum, and a little bit of wheat on his dryland farm. Ron grew up on this farm and in 1993 he transitioned and took over from his parents. Currently he farms with his wife, Kathryn, and their two sons, Alex and Jude, and one employee.    “Growing up on the farm, I never wanted to do anything else, but farm. I liked the production side of the farm and seeing the crops grow as we plant and care for them,” said Ron. “My favorite part of the year is harvest. When I can look out from the combine cab and see the field of soybeans all slicked off harvested, and I know that grain is in the bin and we have something to show for our fruits of our labor.”    Ron also enjoys being part of something more, which encouraged him to join the board of directors. Ron has been on a cooperative board since 1996 and has served on CVA’s board since 2018.    “In 1996, I was very interested in becoming a part of the board of directors to help learn some of the business side of the cooperative, and to give back to a business that I was a part of,” said Ron. “I had a strong belief in doing business with the cooperative, a business that I have ownership in.”    With owners of the cooperative consisting of local producers and patrons, it’s important as a board member to be communicating between the member-owners and leadership. “As a board member, I am able to relay or take back information that I hear from other patrons and customers and give that feedback to the management on things that they appreciate, or things that they would like to see done differently in the business that they own,” said Ron.    Even if a member-owner doesn’t serve on the board, Ron sees the value in doing business with a company that he has ownership in. “For me, it’s the potential for the return of patronage on a profitable year and knowing that I can participate in a profitable company, and that I’m not just handing my money over to a multi-national corporation that’s only worried about the return that their shareholders get on their stock,” said Ron.    Another reason Ron enjoys serving on the board of directors is getting the opportunity to bring back value to his operation in several different ways.    “Being on the board opens up to me a lot of information that I wouldn’t have access to if I was just here on the farm. That helps me to keep my mind open to the changes that are coming our way in agriculture, and that can affect me on the farm,” said Ron. “I think also by being on the board it has helped teach my sons the importance of the cooperative and of giving your time to your business.”    With his 25 years of service to the cooperative community, Ron hopes his involvement with the board of directors impacts the next generation. “It’s important for us producers to band together through a cooperative to help us position ourselves for the opportunities that present itself in the future,” said Ron. “My hope for Alex and Jude is to provide them the opportunity to pursue their dreams. If it’s farming, that would be wonderful. If it’s not, I hope their passion carries forward to a job that is in agriculture.”    Ron and his family are active members of SS. Peter & Paul Catholic Church. In addition to his church activities, he is a past member of the Clay County Extension Council and served on the executive board for four years. Ron was also appointed to the Lincoln Elementary School Site Council and completed a three-year term while his children were in attendance. He is also a lifetime National FFA Alumni Association member. Ron currently serves on the Arthur Capper Advisory Council, which is a public-private partnership between the Department of Agricultural Economics at Kansas State University and the Kansas Cooperative Council.    “I would encourage anyone interested in wanting to run for the board of directors to do so. It’s a good opportunity to learn about the business and to help give direction to management," said Ron.